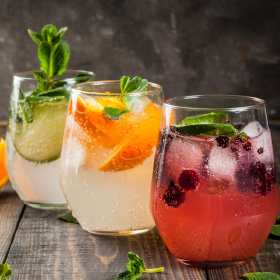 Our Summer Cocktail Menu is here! With the heat bearing down, there's nothing better than a refreshing drink. We've got something for everybody including mojitos, fruity mixes, and twists on the classics.

Doe's Eat Place was established in 1941 by Dominick "Doe" Signa and his wife Mamie. Doe's father moved to Greenville in 1903 and opened a grocery store in the building that now serves as the restaurant. The family lived in a house behind the store. The grocery, which the Signa family called Papa's Store, did well until the 1927 flood. After that, Big Doe Signa went into bootlegging to help the family get back on its feet. After several years he sold his 40 barrel still for $300.00 and a Model T Ford. Around 1941, Mamie received a partial recipe for hot tamales. She improved the recipe and began selling them. That was the beginning of Doe's.